In 2015 we raised funds for Well Child and to date this total has reached over £2,500.  If you would also like to help WellChild, then please visit our just giving site: http://uk.virginmoneygiving.com/team/CotteswoldDairy

A team of us raced the Tewkesbury Half Marathon in May 2015 and at the same time another team of staff handed out milk to those who had completed the race. Dotty the cow made a popular appearance. We have also raised money for WellChild at events we have been to this year, selling milkshakes, strawberries and cream and cream teas, which have been a real hit!

It’s really important to us as a company to support the community and be able to give something back to those in need.

We have also donated over £16,000 to various different charities that have needed help and added to this we have given away a significant amount of goods that have been used to help raise money in other ways.  An example of this is the ‘Feed me this Summer Campaign’ ran by Wiggly Worm, with the aim being to provide children with nutritious meals over the summer holidays.  We donated milk for the children to have as a nutritional drink.  Other examples include milk and cream for events such as coffee mornings, village fetes, cream teas to name just a few!  Each year we also supply the water for the Acorns Hospice charity run at The Malvern Showground.

The Cotteswold Dairy 'Running Team' at The Tewkesbury Half Marathon 2015 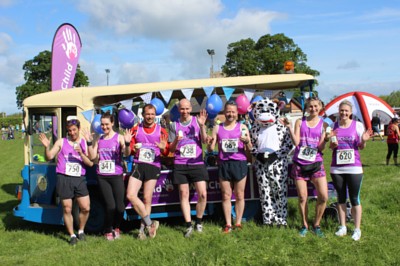